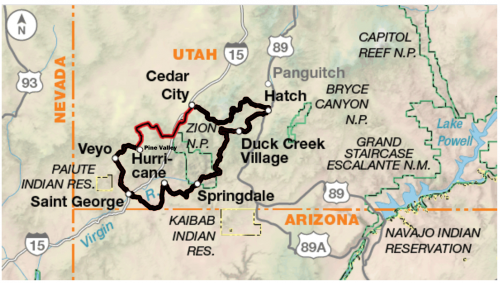 LODGING
We booked a motel to stay in for the night because we were exhausted. Robert had 2 flat tires and I had 1 we needed to patch. We also wanted to stop in the bike shop in Cedar City to purchase some extra tubes. We stayed at Magnuson Hotel for $65 which was on route and right across from the bike route out of Cedar City for tomorrow.

FOOD
Breakfast was instant oatmeal, lunch was tuna packets, tortillas, and babybel cheeses. Dinner was at a diner in Cedar City. We did some grocery shopping in Cedar City to pick up lunch for tomorrow.

ROUTE
We decided to skip the dirt road climb at the end between Kanaraville and Cedar City that was supposed to take us off Old Highway 91 for 6.6mi. We read from another blog that it didn’t add much except taking us off the highway. But the highway had a large shoulder and we didn’t mind riding on it. Plus, we wanted to get in town sooner rather than later because we both had errands to run before the shops closed.

Woke up to find Robert had a flat tire. It would be the first of 3 that day.

On our way out of Pine Valley Recreation Area, we stopped by the only restaurant in town (closed) because they had a vending machine outside. A cold soda on a bike tour is…divine.

Riding on dirt is so quiet and peaceful. It’s not hard to appreciate the absence of cars. I just end up singing to myself in my head. The song of this trip is “I’ve Been Working on the Railroad.” I blame a particularly goofy episode of Star Trek: Voyager we watched before the trip.

Today’s ride was quite easy going except for all the flats. The culprit of mine was a thorn. Damn rugged desert plants! The roads were challenging but nothing overly strenuous or technically difficult.

The views really start opening up to some gorgeous cliffs near New Harmony.

I’ve named my bike “Raicho” which translates to “thunder bird” in Japanese. In English it’s known as the “Rock Ptarmigan” which I don’t think holds the same oomph.

Once we reached Kanarraville, there was a little snack stand open. It was staffed by a young girl in Mormon dress. It really is quite striking the amount of Mormon churches in this area. Perfect time to get a sugar shot! We both ordered snocones which had the most syrup of any snocone I’ve ever had.

It was at this point that we looked at the map and decided we would get a hotel for the night rather than stay at the Cedar City KOA. First, we are not a biggest fans of KOA’s in general when it’s just the two of us (pricey, busy, loud). Combined with the fact that we had errands to run, it just didn’t seem appealing when we would just be spending the evening patching tubes anyway.

We also decided to skip the final dirt climb that was supposed to take us off Old Hwy 91. After reading another blog it sounded like it wasn’t worth it. The highway had a nice shoulder and a tailwind anyway.

Once we got into town, we first stopped to purchase 3 extra tubes due to the excessive amount of flats we experienced in just the second day! I then had to go to the post office to pick up a package. I had ordered a handlebar feedbag from Rockgeist to go along with my barjam harness but the bag was going to be shipped out too late for me to pick it up from my apartment. Instead, I had them ship it to “General Delivery” in Cedar City so I could pick it up en route. I had never done this before so I was a little anxious–what if it got delayed or lost?!–but it all worked out.

The rest of the night was spent grocery shopping, watching a bad movie, patching tubes, doing laundry, eating dinner at The All American Diner, and getting some sleep before the Queen Stage tomorrow.