The first day of our 7 day Utah Cliffs bicycle tour! 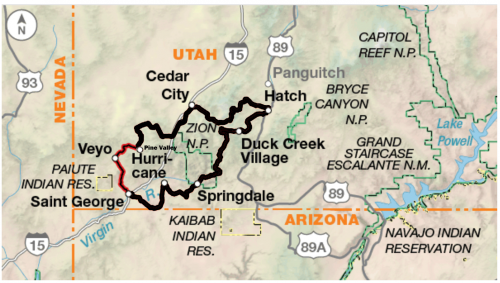 FOOD
We stopped at the grocery market in St. George to pickup food since there wouldn’t be any services until closer to the end of the day. We knew there was some basic hot food options in Veyo that we could purchase and take to camp for dinner.

LODGING
For our first night in St. George, we stayed at the Dixie Palms Motel. It was $36 a night and family owned. I called ahead and they were happy to let us keep our car in their parking lot for the week of our ride.

CAMP
We had planned to camp at Baker Dam (25mi) but decided on Pine Valley (40mi) after we met another cyclist on the ride who recommended it instead. We had already been thinking of making it to Pine Valley after reading another blog so with the new tip, we decided to go for it! Plus we were feeling fresh and it would be a good investment towards tomorrow’s ride.

The bike lane out of St. George was really well kept. It leads to Snow Canyon State Park which we rode through to the other side. Snow Canyon required a $5 bicyclist fee even for passing through which surprised us as that is different from CA.

Snow Canyon was quite beautiful though! It was also the first climb of the trip.

I was surprised to see how much volcanic geography there was in this area. We rode by Cinder Cones and lava rock flows.

We arrived in Veyo and weren’t super hungry, but everybody had raved about the pies.

Once I stepped inside I could tell why–they looked like the prototypical made-by-grandma-classic-american pies. We split a chocolate cream pie slice and asked for two potpies to-go for dinner as well as a slice of blackberry. My favorite part of bike touring over backpacking is eating REAL FOOD.
When we hit the Baker Dam area we hit our first dirt road. I felt like I was out in the ol’ west.

We arrived at Pine Valley around 3pm and it seemed almost deserted. As we were wandering around we encountered some real life cowboys wrangling cattle through the campgrounds. That was a first. Later that evening we saw some stray cattle that must have been missed. Guess they’ve earned their freedom?

There are 6 campgrounds in the recreation area and we circled almost all of them to try and find a camphost to talk to about paying for a site. We were a little confused because even though it was deserted, almost every site had a ‘reserved’ sign on it. Eventually we found one that didn’t and paid for it in a self-register envelope. Upon closer inspection later, the reserved signs were for the coming weekend. I guess this place can get pretty full but on a Thursday it was dead quiet. The few others there were all in RVs. After eating our Veyo pies, we went for a little walk in the area.

Eventually hit the sack after sunset.