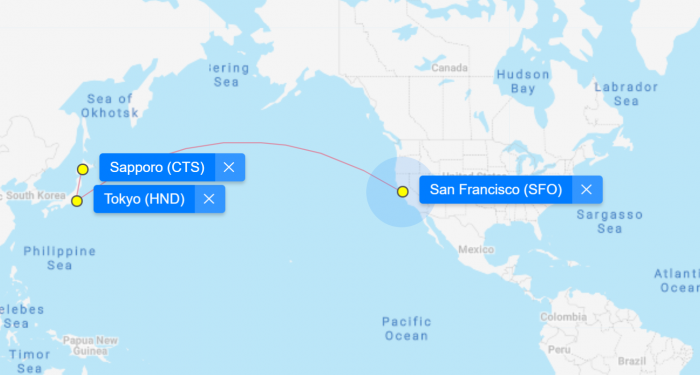 Here’s a table of our schedule with the original estimated time and the actual time. We ended up being very delayed getting to the hostel at night.

SAN FRANCISCO AIRPORT
We booked a Super Shuttle to take us and our large cardboard bike boxes from the city to the airport. We called in advance to see if we could rent the entire shuttle for just the two of us since we had large cargo. Super Shuttle said this would be fine and somewhat confidently told us the bikes should be able to fit. Luckily, they were right!

LODGING
We stayed at Ten-to-Ten hostel in Sapporo. We booked this in advance because they agreed to let James store a bike box during our trip for $3 a night. We enjoyed staying at hostels this trip because they were cheap, clean, and generally the employees were young and could speak English.

Today we leave for Japan! I’m too nervous and excited to talk about my feelings. It’s going to be a long day of travel.

PSA: This was a rough day regarding logistics. This post is mainly going to be me complaining about how much it sucks to travel with bike boxes. We hit so many snags trying to get our bikes from car to plane to bus to plane to subway to bus to train. If you are reading this and planning an international trip (maybe to Japan?) just be mentally prepared for headaches.

We head out at 7AM to go to the SFO Airport. At the counter, we checked in our bikes. However, the attendant told us that in Tokyo we were going to have to take our bikes through customs and then re-check them in again for the flight to Sapporo. But he also said the check-in counter was very close to the luggage carousel and it would be a quick process. We would later find this was not true at all.

We met our friend, James, at the gate. James lives in Seattle and was able to join us for the first two weeks of our trip. We coordinated together to take the same flight from San Francisco but fate decided we would also get to sit next to each other! It was nice to catch up and talk about our upcoming trip.

The plane landed in Tokyo 30minutes late. Then our bike boxes were the last ones to arrive at baggage claim. We weren’t allowed to use the check-in counter closest to customs because it was too crowded so we were asked to go to another terminal. We had to cart 3 heavy bike boxes onto a bus to transfer to the other terminal. By the time we got there, we were too late for our flight transfer. Luckily, the ANA employees were able to put us on the next flight to Sapporo pretty easily.

We arrived in Sapporo at 8pm which was 2.5hrs later than we planned. Before going any further, we were all hungry so we grabbed some food at the airport. Our first taste of some real Japanese food! Well, kinda. There were only fast food options by our gate so I had a little chicken rice bowl from Yoshinoya.

At this point, we went to cart our bikes to look for the subway that was supposed to take us into downtown Sapporo where our hostel was. Robert had done research and all the travel blogs said this was an easy 35minute ride that allowed bikes. However, after struggling with the elevator and going underground to the entrance of the subway gate, the attendees told us we could not bring the boxes because they were oversize. Instead, they told us there was a bus we could take.

So we had to lug the boxes back to the main airport area and ask an employee about which bus we could take. Eventually we found the bus stop and got on the next bus around 9:15PM and made it to downtown Sapporo at 10:30PM. Since the hostel was still over a mile away, we assembled our bikes by the bus stop. There were streetlights nearby so we could at least see in the dark. Also this area of Sapporo had a ton of students so there was still an active nightlife at 11PM but no one seemed to pay any attention to us.

Now, for one more complication. We couldn’t just assemble our bikes, throw away the boxes, and ride to our hostel. Because we were worried we wouldn’t be able to find a bike box for James at the end of the trip, we planned to store one of the boxes at the hostel. So because of this, we took turns riding to the hostel and then coming back to help James carry the box to the hostel.

After all of this, we were finally able to go to sleep. It was a shared room where each person had a little cubby to sleep in (almost like a capsule hotel) and we were definitely the last ones in at about 2AM. I passed out quickly but couldn’t sleep well knowing we had to wake up at 5:30AM to start packing and catch the first train into Abashiri at 7AM. If we didn’t make that train, the next one would not be for another 4 hours which meant we’d already be one day behind schedule. Sorry for the lack of pictures. Today was just too stressful.