A five hour train ride followed by 52 miles on 3 hours of sleep.

First we had to take a train from Sapporo to Abashiri. The JR Okhotsk Limited does not run often.

This was the schedule we saw online: 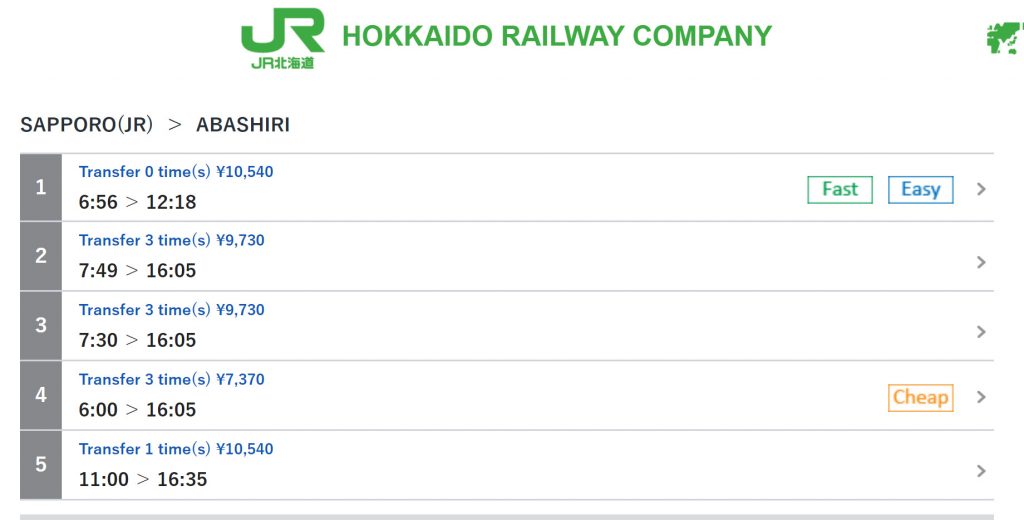 The difference between arriving in Abashiri from the first and second train is 4 hours! It was pretty crucial for us to catch the first train because we wanted to cycle to Shiretoko the same day which was 50 miles. Looking back, this was an aggressive schedule but we wanted to make the most out of our time!

FOOD
We found a ramen shop soon after we left the train station since the area was pretty touristy. Hokkaido is the home of miso ramen! The ramen shop was in a Visitor Center building that also sold local goods and seemed to provide information for tourists.

LODGING
We stayed at the Shiretoko Campground. There was no one working there collecting the fee by the time we arrived, but we found some English-speaking tourists and asked if it was okay to stay here. They said it should be fine if we paid in the morning. The campgrounds in Japan are mostly shared spaces so we just pitched our tent in an open space of grass.

TRAIN
The trains in Japan allow bicycles, BUT the bikes must be wrapped in a rinko bag so the wheels are covered. Here is some information about the process. We arrived at the train station an hour early to make sure we had time to disassemble our bikes and put them in the bags.

We were the first ones awake and out of the hostel at 6 AM. We arrived at the Sapporo train station early to pack our bikes into Rinko bags. It looks something like this in the end–PLUS 4 panniers and a handlebar bag. 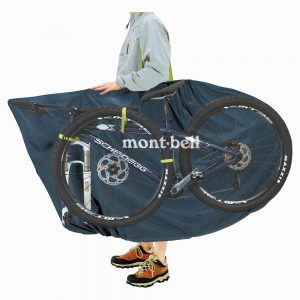 We made it onto the train and since it was empty, we were able to find spots for our bikes behind the last row of seats.

We saw another cyclist on the train with his rinko bag as well. An older Japanese gentlemen who was on a credit-card tour. Always nice to see another cyclist as it makes me feel a little less crazy.

We ate some snacks we had grabbed before boarding the train and arrived at Abashiri at 1pm. 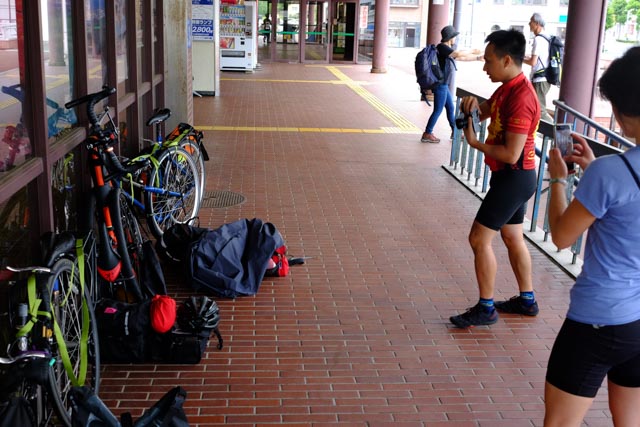 It was drizzling. Not quite the sunny Hokkaido July I had read about, but that’s alright. After re-assembling the bikes, we rode about 2 miles until we saw a ramen shop. Hokkaido is the home of Miso Ramen and me love miso so this was a mandatory stop.

This was a wonderful first day of riding. Even though it was long and we were tired, the new scenery and environment really made me feel like I was on an adventure. There wasn’t much elevation gain so there was plenty of time to just enjoy the surroundings and breathe in the fresh, cool, damp air.

On the way, we saw a Mont-Bell! We didn’t really know what Mont-Bell was except that it was where Robert had ordered the Rinko bags online. When we stepped inside, we realized it’s basically a Japanese REI! Outdoor gear galore! We picked up some extra dry-bags, some stove fuel, and new sunglasses for James. We wanted to grab some chain lube but they didn’t carry any. I also wanted so badly to buy ALL the adorable T-shirts but since we were racing daylight, I didn’t want to waste time and browse. But we vowed to return to another one later in our trip! 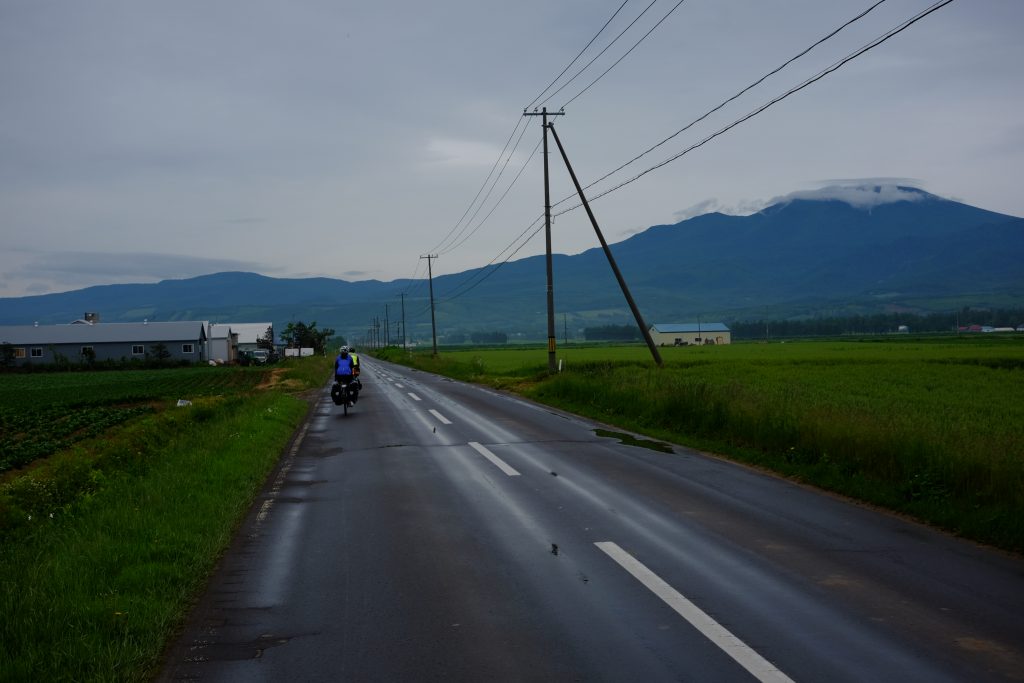 We arrived at the Shiretoko campground when it was almost dark at 7pm. Since there was no one working there, we asked another English speaking camper what the registration procedure was. He said it was fine to pay in the morning. This campground (like many others in Japan) all share a communal space so we found an empty patch of grass and pitched our tents. My favorite part of Japan…the vending machines are everywhere. 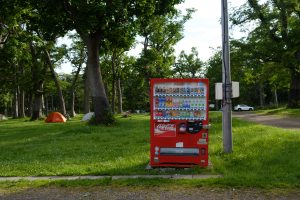 We went out in search of somewhere to eat dinner. The area was really quiet so there weren’t many options still open, but we found a small seafood shop nearby. I ordered the “special” knowing nothing else about it. This was the plate I got for about $20. It. was. incredible. Wow, it’s true what they say about the fish in Japan. It’s so tender and the flavor is much more subtle. Everything was delicious–even the pickles and green gelatin thing. 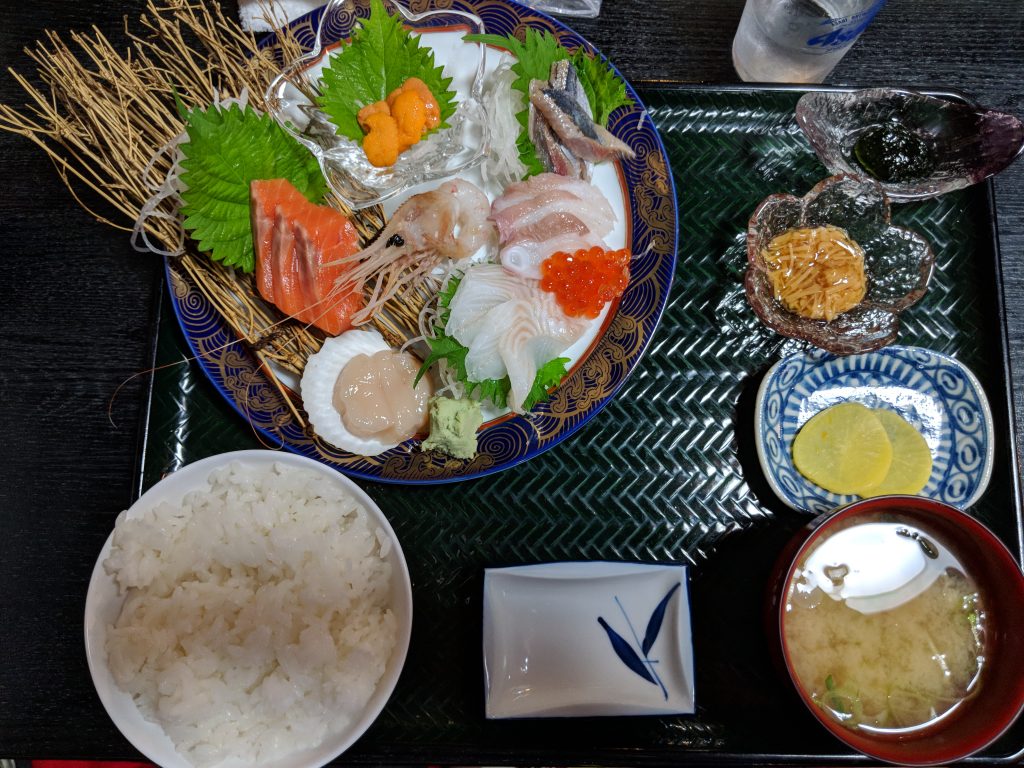 The end of the first official day and I am SATISFIED.